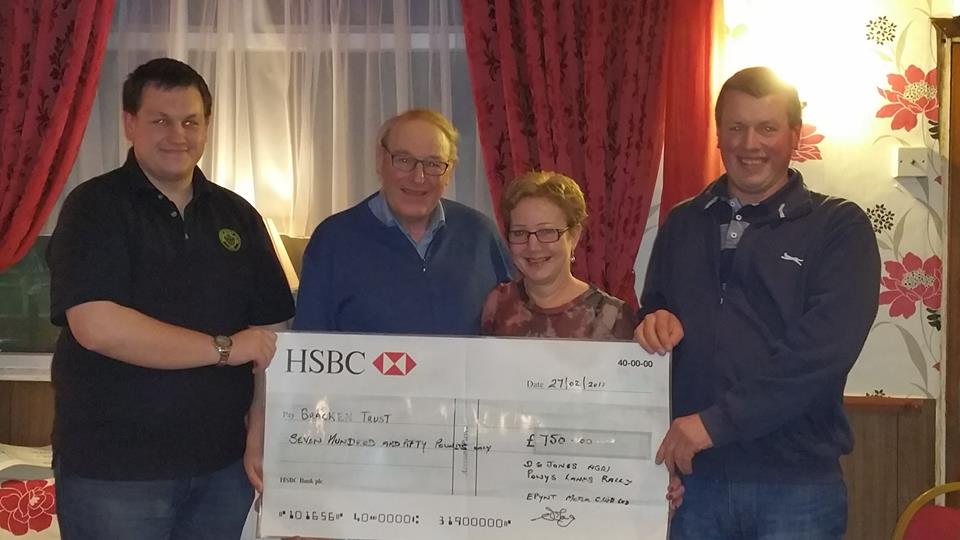 After a successful event the Powys Lanes raised £1,500 to be split between the two chosen charities for 2016 which was the Bracken Trust who support local people and their families suffering with cancer. Ann Williams representing the charity thanked and told us that donations like this help keep these services free, and provide information, advice and complementary therapies which may not be available otherwise.

The second Powys Lanes Rally charity was Wales Air Ambulance now receiving its 6th donation bringing the total so donated since the first 2011 event to £2,800. Peter and Joanna Tonks representing WAA said “Wales Air Ambulance replies on these donations to help improve and expand the service it provides, the possibility of limited night flying and neonatal incubators fitted to the helicopters will provide a service that will help many more people in Wales”

The Old Forge Garage Mewla Rally donated £250 to Sennybridge Junior Football Team, John Williams was happy to accept this money that will help fund and keep costs down to the parents of the Under 7’s, 8’s, 10’s, 12’s and will also help start an under 14’s team.

Epynt Motor Club also raised £25 for Children in Need by catering one of its Auto Tests held in November, and will pledge to buy-a-brick from Wales YFC to help it raise the £75,000 they need.

Epynt Motor Club would also like to Thank Brian Dennis of the Old Forge Garage and Gerwyn Jones of D.G Jones Agri for their sponsorship. We’d also like to thank all the householders, landowners and marshals who help support and make our events possible.